Wow, I played this old Shawn Colvin song because "a few small repairs" has been rattling around my brain all afternoon.  I've been researching paint for my hideous builder grade 1985 laminate cabinetry in kitchen and master bath.  I just can't bring myself to remodel but I would like to update the look just a bit.

But in my heart, I'd really like to move.  My big picture intention is to move elsewhere and rent this condo for retirement income.  Looks good on paper!  I've looked off and during the six years I've lived here and sadly for me as a buyer, it is still a bubbly seller's market out there in the wild of SoCal coastal real estate.  Even major fixers are overpriced.  I do a careful analysis of potential repair costs and when I add those to asking price, in my not so humble opinion, I'd be over-invested.  So I'm still here and dealing with the bad juju, but that's another story.


In late June, I discovered a water leak - a dark spot in a corner of my master bathroom.  I knew right away this was trouble, since I had a prior pinhole leak (behind the wall separating my two bathrooms) in 2015.  I hired a leak detection and repair guy and moved out of my bathroom and bedroom and welcomed the ginormous dehumidifier that ran 24/7 throughout the 4th of July four day weekend.  I slept on a 30 year old single hide-a-bed in my office for three weeks during this early phase of the repair.  I was still working at that time for my client, who had troubles of his own.  I was literally having panic attacks from the stress. 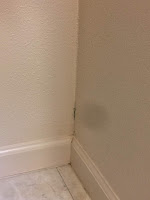 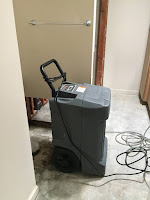 Leak detector guy recommended a re-pipe since I'd had the prior leak as well.  The prior (original) owners of this condo had already done a re-pipe, but apparently they went with the low bid and the contractor used the cheap grade copper pipe.  I dove into getting educated and getting estimates on this upcoming expensive and disruptive horror show.  I got way more estimates than I usually would for repairs - seven.  Turns out this is the field to be in, with the "aging housing stock" in Southern California.  Bids were confusing, convoluted and ranged from $5K-10K.  I checked and verified everything and as always "buyer beware" applies here.

By now I knew I was in for an ordeal and my client and I agreed I'd take some time off to deal.  After weeks of estimates and research, I hired a highly rated and lowest priced contractor to do the re-pipe.  I moved back into my bedroom since I was going crazy sleeping on the hide-a-bed in my cramped office.  But I had to prep for the re-pipe and had to unload all my lower cabinets that had any pipes in them.  I only have a one car garage, so I did box up some of the more fragile stuff, but all the cleaning supplies, pots and pans etc. I piled up in my living and dining rooms.

The crew did a great job all things considered.  The foreman was experienced and organized.  He kept things going as well as could be expected.  Then I got the permit from the City, then the drywall team came in to patch the walls.  Then the cleanup from all the bits of white dust and chunks all over the place.  My job.  Out of sheer exhaustion, I lived with the cabinet stuff in my living and dining rooms for weeks.  I just couldn't face it. 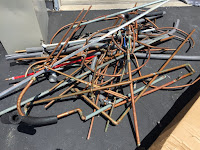 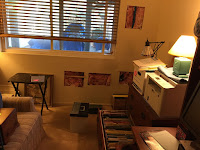 Finally I tidied up inside of my cabinets and put the stuff back.  Meanwhile, I'm using the hall (smaller) bathroom since I had the leak detector guy demo the shower as well.  Glad we did that, since he discovered a second leak where the contractor fixing the 2015 leak hadn't properly soldered a fitting.  So the master bathroom contained only the sink, counter and vanity cabinet. 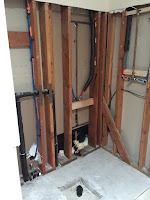 Thus began the shower debacle.  I tried to get estimates to get the shower replaced and contacted numerous contractors ranging from top of the line catering to the wealthy and flaky solo dufus guys with a truck.  Patience and goodwill were definitely wearing very thin by now.

Spent hours online at the Big Box home improvement stores researching materials, after ruling out the first estimate I got - a highly qualified general contract who gave me a bid of $35K.  I made at least three trips to my nearby store and thought I had a great contact in the plumbing department.  After considering several options that either didn't fit the measurements of my alcove shower or were either too fancy or too low end.  I wanted mid-range - quality but this is not my dream home. 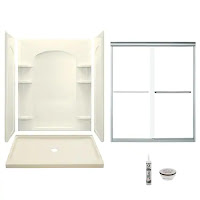 I placed my special order with this store with the assurance from the guy in the plumbing department, that he'd inspect the ensemble kit for damage before releasing the product to me.  I had noted on reviews for similar products (made of Vikrel, whatever that is) that it arrived damaged.

Short version - well, I soon found out that it DID arrive to the store damaged.  Plumbing department guy was all talk and no action.  Shocking, I know.  I had meanwhile hired a plumber who had worked for me before to do the install.  He was kind enough to pick up the ensemble kit from the store and bring it to my carport.  The first carton he opened was the base, and there was a visible crack.

I gave him $20 for a pizza and we took off for the store, with the damaged base back in his truck.  Big hassle at the store, again, shocking.  This was one piece of a kit.  Finally a manager figured out how to do this as an exchange and the plan was that I'd just pick up the base and they'd return the damaged base with the second order.  How they handle it, I did not care.

This second special order took almost three weeks.  I calmed down and tried to distract myself with other projects while waiting for its arrival.  My next upsetting mishap occurred at 7:20 a.m.on Monday morning September 23.  I was aware that my HOA was painting the exterior of our units, but we were told it was one building (four units) a month over a year.  I was given NO NOTICE.  Under normal circumstances I'd have been annoyed and maybe a little inconvenienced, but with all the large cartons of "shower ensemble kit" and my master bathroom commode stored in my carport/patio which needed to be accessed for powerwash, prep and paint.  I really lost it.

Then I enjoyed a series of hostile emails with our new "property manager" at the management company my HOA is contracted with.  I'm not proud of my attitude but there's plenty of blame to go around in all the confusion with this paint project.  But I digress.  The HOA president and another neighbor came by late in the day to move the cartons of shower ensemble kit into my demo'd master bathroom.  Meanwhile, I'd packed up everything I could out there.  Exhausted again.  The exterior paint job took about a week.  I wasn't too impressed with the crew although with some supervision and some touchups, the end result I'd say was B+.  Timing and communication, I'd say big fat F. 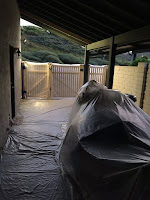 The store was typically unhelpful about the estimated arrival date.  So very Corporate America and not customer friendly.  On the day I was initially advised it would arrive, I phoned the store, and all they could tell me was the original estimated date, Friday, October 11.   They said it wasn't there.  So I cancelled the plumber for the following Monday, Oct. 14.  Two hours later I got a call from someone else at the store saying it was there.  I tried to reinstate the plumber for Monday but he had already filled the slot.  I was fuming.  Then later on Friday evening, I got a text saying that my order was going to be delivered the next day, Saturday October 12 between 9 - 12 noon.  What?   I hadn't ordered home delivery!  And my carport was all prepped for the condo community garage sale the following day, so I couldn't have the giant carton out there too!

I called the Los Angeles delivery company who had texted me and said I'd have to reschedule.  The guy said, sure no problem and we set it up for the following day, Sunday afternoon.

Sunday morning, nothing.  No text, no call from the delivery company, so I phoned them.  They said, "Oh, the schedule request has to come from the store."  Again, what?  I then scrambled to reschedule the busy plumber and establish that the replacement shower base was in fact at the store, not on a truck somewhere.

On Thursday, October 21, my hero the wonderful plumber installed the shower.  He ran out of time since he had plans with his kids that evening, but he came back on Sunday to finish up.  What a guy. 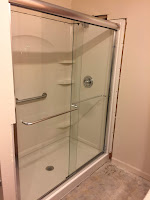 I'm working this week on drywall patching, and have hired a guy who was referred to me to finish up the patching in the master bath later this week.  I'll figure out if I can repaint the wall using leftover paint if it's still usable after six years in my hot garage.  Or hire a painter.  I also have a cabinet paint kit my cart on amazon.   I'm avoiding shopping at a certain Big Box store as much as I can. 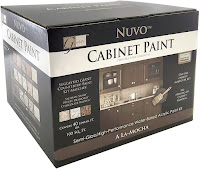 Then floor covering in both bathrooms.  I may consider tile, but am leaning toward vinyl.  In my dreams I'm going to replace floor covering throughout the condo, but that would involve packing up all the surface and shelf objects so furniture could be moved.  I know people do it all the time, but I just can't imagine it. 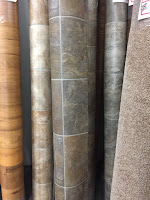 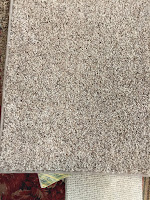 On HGTV they don't do renos or flips when the homeowner is actually LIVING there!  It's interesting to see behind the walls and learn a bit about California Construction.  But like like the cliche about not wanting to see how laws or sausage are made, living through all these repairs just ruins the whole concept of one's home as a sanctuary and respite from the mad world.

Shadowbox Project This project doesn't really qualify as downsizing, since I had maybe 10 boxes of family memorabilia before doing the s...